In This Lifetime: You Can, So Do 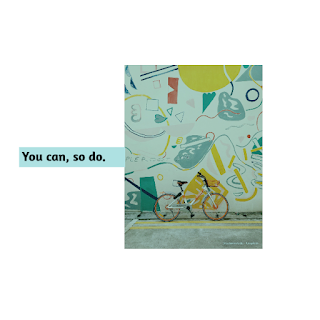 If you can make a donation, send it out.

If you can canvas a neighborhood, bring a friend.

If you can talk with conviction, speak your mind.

If you can find your voice, write a letter to a politician.

If you can march in the streets, go forth with conviction.

If you can make a statement on social media, don't be afraid.

If you can assist a person in need, give them a hand.

If you can run for office, be yourself and tell it like it is.

If you can debunk a myth, correct the record.

If you can read and educate yourself, seek enlightenment.

If you can offer a shoulder for someone hurting, offer your kindness.

If you can write a treatise and publish it, get busy.

If you can listen, find your compassion.

If you can open your mind and heart, understand the perspective of someone other than yourself.

If you can be receptive, learn something you didn't know.

If you have a patch of land, put a sign on it.

If you can sing, give it your all.

If you can shed your fear and hardness, fall in love with all the possibilities of this life.

There's always hope and a way to instigate change.

If you seize your potential, others will be inspired, too.

Hopelessness shelters in inaction. You can make a difference, so do. I believe in you.

Posted by jfulford at 9:50 PM No comments:

Email ThisBlogThis!Share to TwitterShare to FacebookShare to Pinterest
Labels: inspiration

Posting this story for a couple of friends. No real residual grief going on. I don't even have a garage anymore.

This pair of shoes has a story. The Walking Man wore these shoes for several years, when he first started walking, before he became known as The Walking Man. I guess, if you want to get technical, the story of the shoes started in a doctor’s office. 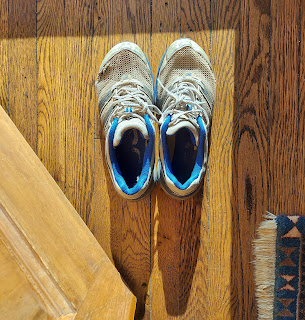 “You have metabolic syndrome,” the slim doctor told the middle-aged man.

The man looked hard at his round belly.

The man loved to eat. Going out to lunch was a must during his work day. At home, he loved cooking and entertaining everyone. And that’s how the roundness made a home on his belly. Invariably, he would get tired after dinner and nap to feel better.

“You’re tired,” said the doctor, “because your metabolism is low.”

The man, not yet 50, didn’t want to take blood pressure medication for the frequent headaches that had taken him to the doctor. He wanted to show the doctor that he could do something besides be like all the others who just resigned themselves to illness. So, he began to walk.

“You’re like the poster child for high blood pressure,” his doctor actually said. So the man kept walking. That’s when he bought the shoes.

Soon, his friends started recognizing him on the street as they passed him in their cars, and he became known as The Walking Man. Acquaintances would stop and ask if he needed a ride. He almost always refused because walking was the point. Time seemed to be on his side. Walking bought him more time.

He took his shoes to a new city and a new job. His whole family went. But he didn’t stop walking. In fact, he sold their second car. He walked everywhere. To the grocery. To the video store. To the sushi bar. To the donut shop, because he still loved to eat. In his new place, no one even questioned his walking. He walked so much that his shoes started to wear out. So, he bought a second pair, not quite as comfortable as the first.

One day, he went to the gym, and he ran out of breath after walking on the treadmill and lifting weights. It scared him. He couldn’t catch his wind. His wife came to pick him up, and he told her things weren’t right. On the nervous ride home, she called the ambulance. Sirens blew in their neighborhood, and he sat in the car waiting, feeling small and tenuous. “I’m scared,” he told her, his eyes told her. But the paramedics couldn’t find anything wrong, but they took him to the hospital for more tests.

There, they told him his heart had a small heart attack. It was so small, it hadn’t done any damage. What news! His good shape had helped him survive a close call. Everyone felt cautiously optimistic that The Walking Man had kept himself alive by walking.

He went home but not without a bunch of drugs. This made him sad, but he kept walking. For more than a year, he walked after the heart attack. He occasionally wore his first pair of shoes because they just felt good, even though they were in sorry sorry shape. They gave him comfort.

He wasn’t wearing them the next time his heart acted up. He may have had on his hiking shoes, that, plus a pair of biking shorts, an old t-shirt. He’d gone on a mountain bike ride. A friend took him on a hilly trail. The friend didn’t know about the doctors, or the walking, or the little bottle of nitroglycerin pills he kept on him at all times.

Near the top of the trail, The Walking Man stopped his friend.

“Can we slow down?” he asked the friend.

He couldn’t catch his breath. He wanted to turn around and start back. The downhill would do him good. But it didn’t. He needed air in his lungs, and it wasn’t coming.

“Can we stop?” was his next question. So, a mile or so away from the trailhead, they got off their bikes.

They both sat on the side of the trail. It was a nice spot, wooded, quiet, with a strong tree to shade them. There, he told the friend about his heart. He took a few nitro pills. He handed his phone to the friend after dialing his wife. Then he fell over.

A few months later, the walking shoes went into a bag. The bag went on a moving truck. The truck went back to where The Walking Man had started walking. His family doesn’t know what happened to the hiking shoes or clothes he wore on his last day in the woods; they didn’t want to ask the officials or go see The Walking Man after he’d stopped breathing. They may have been burned with his body. Or they might have been given to a second-hand store. Or they could have been put in a dumpster. They thought maybe those details didn’t matter so much because the man was gone.

The shoes he liked the most, this pair, haven’t walked again. His wife put them in a bag and hung them in the garage, with a few of his old tools, and camping equipment, and a few unopened boxes of his kitchen utensils. She occasionally looks in the bag to remember the walking. To the grocery, to the movie store, to the restaurants. The shoes show her time.

Email ThisBlogThis!Share to TwitterShare to FacebookShare to Pinterest
Labels: God, why 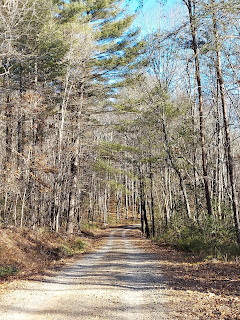