Two months ago, my kids convinced me to adopt a new pet. The day-long search ended by bringing home two new pets -- litter mates. We renamed the long-hair domestic feline beasts Fish (gray) and Slayer (black). At the intro of the new cats, my two-year-old short hair, Ollie, made noises we'd never heard before. Deep, unhappy, throaty growls. We immediately began an on-the-fly program of assimilation. One set of cats on the kids' end of the house; the other younger cat on my end; wet food inbetween. We've seemed to survive Ollie's incessant, instantaneous grumbling phase. Now, he just deals, snout in the air. The cats have formed an uneasy alliance. The dog slinks about, trying not to get in their way. 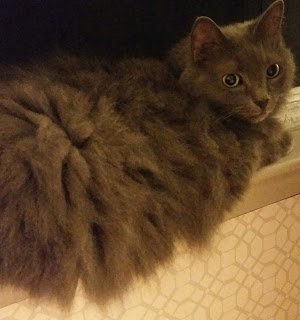 My project list has evolved into a similar state of détente. I have papers in various forms stuffed in folders and anti-version-controlled computer files (anti-version-controlled is my way of saying, if I bother to open it, it must be the right version). One box holds a memoir. On the desk, a folder barely keeps the loose contents of a precious novella. Another stack is marked non-fiction book. An unfinished novel hasn't even justified the ink. Each book doesn't cross territories. I kinda wander in and out of the words, and generally watch passively as they decide whether they want me to pet them.

At some point, all those projects were something like therapy. Good for the gut and brain to spill out. The stories, whether real or made up, had a point and a purpose. Then they become something else. Real objects to consider. Revisions to undertake. Thoughts to apply.

I watch my cats instead. They're easier therapy. I know what to expect out of the fur fatties and their short lifecycles. The books, less so. I'm still trying to define their territory. Maybe I should just kick them out of the house. Tell 'em to make it on their own. I'd done with you, manuscript! Just get out in the world already. Leave me to my cats.