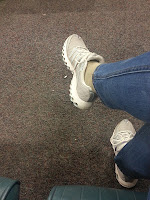 What does this have to do with the writing life? Not much, other than I wanted to send the year off with a wave and a nice kick in the pants. 2012 could have been better. I could have written more. I could have published something. But, I keep trying. New Year's Day is for regrouping. Shaking things up. I don't make resolutions, but I do reflect, and I'd like to reflect less in 2013. I want to DO. Good thing I don't mind wearing tennis shoes out in public.
Posted by jfulford at 7:40 PM No comments:

Self-Publishing, Out of the Closet

It's official. Self-publishing has gone viral. Mainstream, in fact. When both Time magazine and NPR write articles within nine days of each other about the growing legitimization of self-publishing, I'd say that seals it. It's okay to self-publish. Not only is it okay, it has become the method whereby frustrated writers can find an audience before they find a good agent or publisher. But by the time they have a following, the authors may not need the latter. Nonetheless, we have a semi-affordable ground to prove ourselves, albeit one with many pitfalls, not the least of which is trying to find our audience. (BTW, I've become a pseudo-expert at building author websites and Facebook pages in the process.)

Time's article, The 99 Cent Best Seller, is a more comprehensive look at how some writers are successful at self-publishing their work. WARNING: Most are not. The article cites a graph (though doesn't publish it) analyzing the top 50,000 Smashwords titles. "It looks like a nearly perfect L, with only the tiniest sliver selling more than a handful of copies."

The NPR piece, Self-Publishing: No Longer Just a Vanity Project, focuses on two writers who self-publish, both with varying results. Like the Time article, one of the writers tallies how much it cost to put out his first book. His total: $2,500. It can be more. That's because writers end up doing everything or hiring out the things they can't do. At this point, I've already spent, out of pocket, $1,100 for my first novel, half of which went to an editor (whom I highly recommend, Novel Doctor). I've also bartered for other services. But that doesn't account for the untold hours I've worked and worked on writing, revising and "platform-building" on the web and social media. Granted, I haven't self-published a book yet because I'm still trying the traditional route first. Conclusion: I'll probably spend more money before it's over.

I sympathized this week with a fellow Twitter user, who tweeted about receiving his 111th rejection. I suppose once I get to 200, I may call it quits on the old way (I've got a long way to go, but my tolerance is weakening). As for my Twitter interaction, here's a nuance worth mentioning. After I replied sympathetically to the tweet, the writer apparently deleted his original. It's no longer in his feed. We writers are still sensitive to rejection. No need to publicize it.

The steam behind the self-publishing train has been growing for years. I'd like to think I scooped the national media with my regional article about self-publishing, which appeared in nwaonline.com a year ago. The world is flying by. Get onboard.

Tomorrow is the last session for a revision class I'm attending at the Multnomah Arts Center in SW Portland. Four poets (including myself) and a woman writing a memoir for her grandchildren have been sharing work and revising pieces with our facilitator Judith Pulman. Judith is a force, a new person I've connected with in the Portland writing community. She is also a poet, having graduated recently from Pacific Lutheran University's MFA program. I haven't read much of Judith's work and the class doesn't revolve around her aggrandizement, which is refreshing, but she has been a good guide for us novices. She's titled the class "Revision: Getting Beyond 'I Like It'".

So we each read a piece (or two) and then sit quietly as the others in the group express what works for them and what doesn't. We go about the process in a somewhat methodical way by first giving a one- or two-sentence statement about what we believe the writer means, in essence, the poem's story or conflict. Afterwhich, the critique (and I use that word loosely because so far, it hasn't felt like critique) takes shape depending on what surfaces from the readers' impressions -- some readers express confusion, or desires for a different direction, or deep connection. As part of the process, the writer reads the work, then another person reads it a second time. I struggled to read aloud a piece for another writer last week because it touched a soft spot.

Nevertheless, the class is teaching me that even if we think a piece is DONE, it has room to grow, to change and possibly to become something brand new and more powerful. Judith encouraged us to bring in pieces which we believed needed work, which I have. And, the discussions have led me to see poetry in a new light. Poems are translation. I'm not a person who holds tightly to first drafts (or second or third drafts), but this has made rewriting a vaster place, where many doors are ajar.

Judith provided a concrete example last week -- the "process" drafts of an Elizabeth Bishop poem (CLICK HERE). Bishop's first runs at "One Art" read like rambling laundry lists with mental asides. Then, over time and contemplation and tightening, the finished piece comes alive. But, our motto for the class is Paul Valery's statement: "A work of art is never finished, only abandoned."
Posted by jfulford at 4:47 PM 1 comment: