Askance at a Celebration

Only a writer would make writing prompts a fun birthday activity. But they were for me last month when I decided to write brief essays leading up to my day. Funny, though, a few friends on Facebook, most of whom know me, gave me some surprising feedback. I didn't necessarily feel like these were a downer when I wrote them, but several readers took them that way. Wasn't my intention. These are reflections on good stuff with reality woven in. Five in total.


#1, The Bike of Second Chances
Woman walks into a bike shop. Tiny place. Two rooms. Shiny bikes. Fresh gear. Two men behind the counter. A mechanic and a counter guy.
Her bike is 30 years old. She’s sure it needs a tune-up. Probably worse. She almost trips rolling it in. She braces for the up-sell.
“Look at that,” the mechanic tells the counter guy, maybe even elbows him. ”You got one just like it.”

Should she blush? Are they admiring it? Or amazed it’s still in one piece?

“I wanna start riding it more,” she says. “I just need to make sure it’s ready.”

The counter guy wheels it behind a glass case full of sparkling objects that would probably make her ride faster, go farther, look far more hip than she does on her one and only mountain bike. Her first real boyfriend helped her buy it before she knew what mountain biking was, before she had a mortgage and teenagers to raise by herself. Parenting pushed the bike to the recesses of the garage, and then life pushed everything else into the recesses. She wanted to come out of the recesses.

The mechanic lifts it up on the bike bench right away. She sucks a little air, like she’s watching her cat at the vet poised for an examination.

Thinking it might be better to look away, she wanders into the store, hoping the mechanic will be gentle when he delivers the bad news. Oh, he’d say, your axle is shot. Geez, he’d point out, these gears are stripped. No way, he’d admonish, should you ride this old thing on the street.

“Hey,” he calls back, within maybe three, five minutes tops. She hustles over, stiffens her neck. “Nothing really wrong with it,” he says. “I’d say, ride it ‘til the wheels fall off.”

A year later, the bike’s on the street, and she’s on the bike, rolling out every wrinkle.

#2, The Mysteries of Family Ephemera
Mom's always had a killer smile. Must of smitten Dad pretty good, so much so he worked hard to beat out his best friend, Freeman, who was dating Mom first. Dad took lots of pictures and slides back when he wore sideburns and horn-rimmed glasses. I've got a picture or two of him, packed away, looking all James Dean. Not sure who took the pictures of him. He took this picture of Mom, I think when they were still dating. She just turned around someplace outside on a Missouri afternoon, where they were together one day, and he caught her full-on happy. The precursor of a selfie. She still smiles like that, on occasion.
My other family photo shows Dad's side of the family. On the front row, seated far left, is Pearl. She was still alive when I was a kid visiting Lebanon, Mo. Aunt Pearl was how I knew her, but my memories were just from an 8-yr-old point of view, and everyone then seemed dignified. Right above Pearl, my Dad has told me, stands Mabel. The story goes that Mabel was a bit of a playgirl and fancied herself a few boyfriends. She never married. I'm feeling (channeling?) ya, Mabel. But I'm getting a late start.
If you look hard enough, you can see my reflection in the glass of the group picture. Wonder if someone will be writing about me to hundreds of acquaintances in a few decades?


#3, Life on a Train
Life on a Train
...slows waaaay down
...shreds your cell service
...causes you to revive that spectacular-crazy idea you've put on hold for too long.
Outside the Train
...the landscape is grass, snow, mountains, the horizon
...scenery you never thought existed
...and an ongoing rumble
Life on a Train
...goes on hiatus for a while
...places you at the mercy of the American railway system, and despite its potential, A-types will mutiny, screaming for a rental ride rather than a cheap bottle of wine in the bar car
...opt for the bar car.
The Train Stops
...whenever it feels like it, or so it will seem
...in the middle of nowhere at anytime of day, where you'll see the signs of someone with a good sense of humor who also had time on his hands
...and during the night, it goes so dark, you can only see your reflection in the train window, and you'll feel yourself looking inward, wondering why it took so long to get there.
#4, The Hat
Sometimes, an object carries a story. This hat, for instance, tells a story of wanting to be cool and its consequences. See, those young things on those spring break shows in their scant bikinis, well, all the cool ones wore hats like this. Imagine feeling that damn good about yourself by wearing a hat.
A friend of mine had to move her family out of her house, and that's where I saw this one. Cool was within reach. I helped the last day of the move, at the 11th hour. I actually felt like a bad friend for showing up late to the "party." But the timing proved fortuitous, for other reasons than the hat. 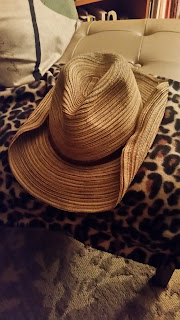 The nitty gritty of all the million decisions made during a move had come to a head. No more processing could be done--what to keep, what to throw out. It all seemed a little senseless after weeks of decluttering and downsizing and packing. The house, still full of unpacked possessions, was down to the arcane items that come into our lives. A Ouija board, mismatched cups and saucers, old cookbooks, overloved stuffed animals. After days of last-minute sorting, nothing else seemed worth taking. I felt more like a counselor than a friend pitching in. I'd been there before, painfully rerouting my direction.
You see, her move wasn't by choice. Gentrification and the soaring prices of Asheville real estate uprooted her and her small close-knit family. If you live in a home for a decade and a half and are unapologetically asked to uproot, all the stuff seems suddenly more precious and a weight around your neck.
I bought the hat and few other items--and then felt like I had trespassed on my friends' misery. To counterbalance, I decided to become the caretaker of the hat and not the owner. I've worn it, but it looks like someone else's.
I've told my friend that the hat is still hers. It reminds me not to covet and to understand my own possessions are fleeting and full of an energy not my own.
#5, Artifact of Love
He started all his designs by sketching. It could have been on a napkin from a favorite haunt, or across the back of a used envelope, or in one of his dozens of sketch books. He said he was studying the problem. And when the problem is making something beautiful—making something timeless—you better study it. Occasionally, his sketches took on whimsical elements, and for no reason, he’d draw a hot air balloon in the corner, or a strange curve would be added to a bracket or a clockface. Maybe he called on the ghost of Charles Rennie Mackintosh to pull off an uncharacteristic design. Like the Scottish architect, he understood the human appeal of surprise. How could he not experiment? Especially if he were the builder presented with his own challenge.
He started the jewel box late in December. Always late, just days before Christmas morning. Before time ran out, he threw himself into chiseling and sanding and varnishing the piece, the one he determined was the most beautiful design of the season. For his wife, he took greater pains to pull off challenging inlays and mortis-and-tenon connections that would drive a master craftsman into fits of despair. His focus on creating the work gave the design life. He often marveled over the transformation from 2D to 3D, when the real magic happened.
While putting the final touches on the jewel box—a small tabletop tower for special trinkets—she accidentally walked into his studio one late night. He was sanding the finish. “Oohh,” she murmured and pulled back from the doorway and the ill-timed glimpse. The downturn in her voice told him she regretted spoiling his surprise. He shrugged and told her to stay.
He didn’t say anything profound. He still had work to do to make it perfect. He just smiled, knowing he’d place it under the tree anyway. Like a surprise. Like it should be. With a love note inside for her.

Posted by jfulford at 5:03 PM No comments: