I Am Not a Scientist

I’m not a scientist. But I work among them. I see my job as interpreting. My words give a voice to the science that could be affecting you right now. And, it is. The world is changing, and I don’t mean politically. It’s about our atmosphere and the ocean and the carbon we’re putting and have put into both. This isn’t my attempt at a lecture. This is an essay about what I see in my everyday work.

I initially laughed a few years ago when a colleague of mine asked: “What’s a different way of saying ‘It’s the hottest ______________ (yr, month, quarter, day) ever?’” That description has been needed so much of late, it has become a cliché. You may have noticed it, too, where you live. Maybe not more heat. Maybe something is different than what it used to be: it’s drier, wetter, colder. Yes, colder. If snows are happening where they didn’t used to, it counts as odd to those who live there. The changes may simply dawn on you one day: This weather isn’t normal; it’s not what I remember. 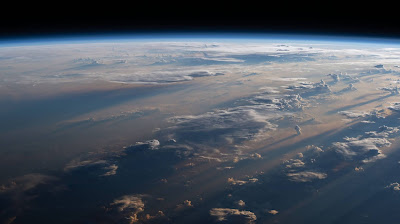 Many of the people I work with study these changes. They monitor temperature and precipitation trends, soil moisture, or jet streams. They tally extreme weather events. Some focus on very specific questions and fields of study. They use language and calculations that ordinary people, me included, don’t really have a working knowledge of. What I do comprehend is that we’re in uncharted territory. In a nutshell, the planet is warming. We know because observations of the world have been recorded since before your grandparents were born, even before there was an America (https://bit.ly/3b7Z5ro). This information has been handed down and then documented, on paper documents and in computers. Now, we can look at the records and determine where we stand. Where we stand today is a hotter place—global temperatures in some locations are consistently above normal. Carbon levels are higher than they have ever been on record. Independent large scientific organizations across the world agree with these assessment. We are still learning what this means in the long run, for our future in a different climate.
But, what is normal? Well, think of normal as a span of certainty, when conditions fell within a range and didn’t veer too far off center. Except now we’re veering off center, and in same cases dramatically. One place in particular, Alaska, which I think of as the canary in the coal mine, is significantly hotter. It just recorded its hottest year in 95 years, the length of the state’s official records. Alaska’s statewide average temperature last year was 6°F above average; Anchorage recorded its first 90°F day in 2019. Think of this in terms of your own temperature. On average, the average human temperature hovers around 98.6°F (though science says this is also changing). If you were to add a degree, over a short period of time, you’d feel it. Your systems wouldn’t work like they should.
Another cold place that’s bearing the brunt: the Arctic. A scientist I know told a national news reporter this summer he/she wanted to get to the Arctic as soon as the pandemic ended but before the ice melted. He/she had just published a paper that indicates the Arctic could be mostly ice-free in the summer within 15 years.
People in my professional life aren’t full of doom and gloom; they are heads-down engaged in the serious study of changes going on across the globe and in our backyards. In many cases, it is their life’s work. They have been working in their specialties since the beginning of their careers and will keep on, mostly out of the limelight, until they retire. Some of the scientists study things you and I will never actually see: carbon levels in the ocean, drought in South America; or incidence we don’t want to see: unprecedented flooding along our coasts, coral bleaching. They would probably never write an essay like this, not because they couldn’t, but because they are concerned with the science and the exactness of it. My take on things would not be scientific enough. No one from my work endorsed this post; nor did anyone review it. I have to state that because of the nature of my job.
What they aren’t doing is debating among themselves about whether any of these major changes are actually taking place. I could send you to reports that have been a year or more in the making, or monthly charts, or data tables of temperatures and precipitation and ocean conditions, but would those numbers and figures and science-making make a difference to your understanding? I’m not sure they would. That’s why I wrote this essay. To tell you, unequivocally, change is happening. How good are you with change?
Posted by jfulford at 11:53 AM