The firsts end today. A friend in Portland has gently reinforced this idea since last March. This is supposed to comfort me. The first year without Daryl ends tonight at midnight.

My last visual memory of him is from Portland, from the window of our house. Standing in the living room, I watched him lift his mountain bike into the hatch of our Subaru. He had on a ratty t-shirt and shorts, ready to get muddy. We didn't say good-bye. Unusual. He didn't come in for a quick kiss. Again, unusual. 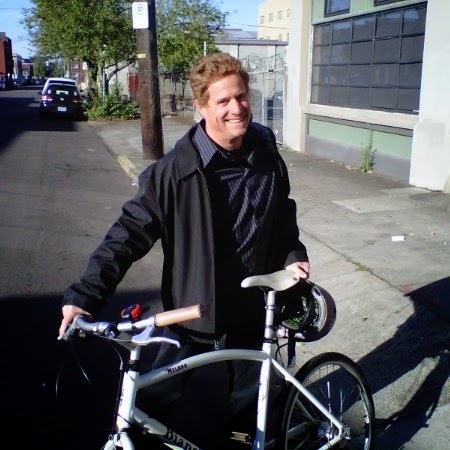 This post was unplanned. I'm just letting it come out.

Our youngest daughter had been invited on the bike ride. She decided not to go. This troubles her now. It was for the best. He rode with a friend up a trail in Forest Park. He became short of breath. It was a beautiful day and the trail was green and perfect. They stopped to rest on the side of the trail, and the friend called me on my husband's cell at about 5:30 p.m. Daryl had punched my number, handed it to his friend and said, "You better talk to Jennifer."

For all I know, the last word my husband uttered was my name.

I didn't hear him in the background during the call. I didn't talk to my husband, only the brave friend. Words were quickly exchanged about Daryl's shortness of breath. I told the friend to call 911 and waited to hear back. Frantic stuff happened on my end. I had no car to go to the trail and didn't know where it was. By 8 p.m., a man in black arrived at my door. Yes, he was literally dressed in all black.

Daryl had slumped over as soon as the friend ended the call. He had died on the trail, probably instantly. His heart, which had suffered a mild heart attack the year before, stopped.

I never saw him again. It was too painful to go to the morgue.

I had no intention of writing this, like this. But this morning is different. It is the last of the firsts.

Death stories have a voyeuristic quality. People want to know what happened. I told the death story probably more than a hundred times in the first week after his death. Friends. Family. I tell it now whenever anyone asks. Maybe not all the details, but the elevator speech. It has become an elevator speech. I usually don't cry. This is considered normal.

Death changes life. It changes people. It changes circumstances. This isn't always negative. But it readjusted the interior timepieces. I tick differently. It just happens.

I'd like to say the hard part is over. I cannot assure myself it is. That's because of the strong feeling of arbitrariness this event has imposed on my directions. Plans are wonderful, aren't they? It's good to make plans. Make them. They comfort us and give us goals. I have made some plans and kept them this year, but ... always the "but." Where does death fit? It doesn't fit into plans. It makes nonsense of them.

I've only recently begun to write a little about this major event in my life. I know it is a huge bummer. Why would anyone want to come back to a blog about a subject no one really discusses in public? Or wants to hear about? That's okay. I'm working through it.